A MARCH, and much more. 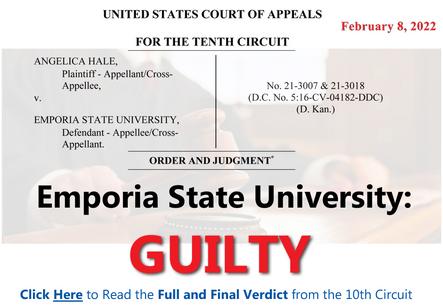 Visit our UPDATES page for the latest news 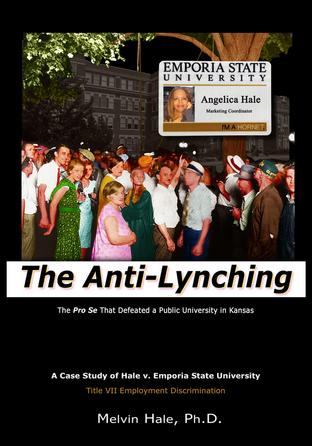 *In addition to the 3 federal cases against ESU employees relating to the hate speech incident at Emporia State,

there is currently a 4th active federal discrimination case against the university filed by Dr. Rajesh Singh: http://bit.ly/1Mputzk 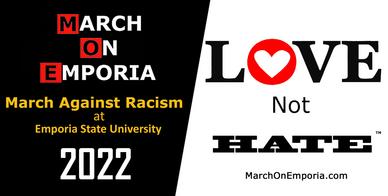 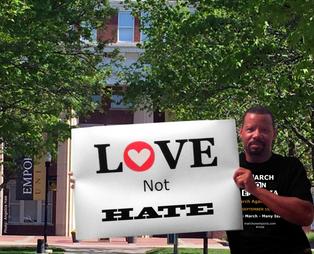 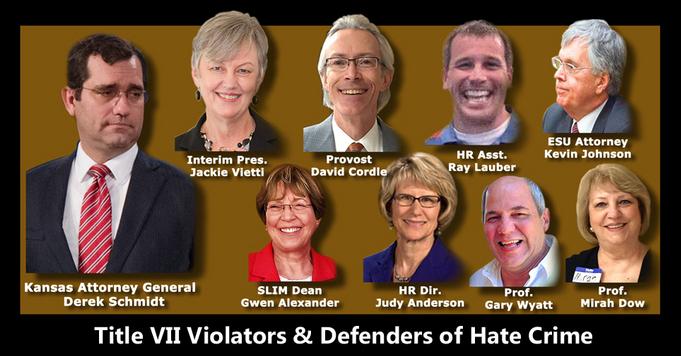 GET INVOLVED, BE INFORMED

Over 300 petitions! Visit our social media pages below or see our Change.org petition and comments by clicking here

Statement on the Tenth Circuit Verdict on 2-8-2022

When Angelica and I arrived in Emporia in July 2014, we learned that SLIM Dean Gwen Alexander had just fired the only two people of color in the department, Dr. Rajesh Singh and Dr. Cameron Tuai. The department was in palpable disarray. As small as the department was, with less than eight professors, the tension was so thick you could cut it with a knife, and we were actively being solicited to take sides against Gwen and her sidekick, Dr. Andrew Smith, who was the former Dean of SLIM. Because of their loyalty to Singh and Tuai, by the end of our first semester two more beloved professors would leave; Dr. Chris Hinson and Dr. Janet Capps. In October 2014, unbeknownst to us, a very important letter signed by five tenured professors at the end of a grievance brought by Rajesh detailed significant racial and minority discrimination in SLIM under Alexander, including tolerating the veneration of Hitler, and an open climate of hostility against minorities. That letter went to then-President Michael Shonrock and then-Provost David Cordle in October 2014. Let that timeframe sink in for a minute.

What this clearly means is that we walked into an environment where racial animus and discrimination was a pre-existing condition, similar to walking into a spinning propeller, and the results have been just as horrific as far as we are concerned. Dean Gwen Alexander felt particularly bold and strident with her authoritarian and dictatorial behavior. On one occasion she stated to Angelica that she had nothing to lose if Rajesh sued her because the Attorney General of Kansas would defend her, and she had nothing personally to be concerned about. She could just keep on doing her job while Derek Schmidt would be dragging Rajesh through the legal system; only fast forward and change the names, and its Dr. and Mrs. Hale being dragged through the legal system by Kansas AG Schmidt, and having to hold on for dear life until they made it through the Tenth Circuit Court of Appeals, seven years later. Dean Alexander, who was also the former Interim Provost of ESU, behaved as if she was untouchable. She could violate your civil rights all day long.

This brings us to the crux of our dispute with Emporia State University from 2014 to today (since they are still unrepentant), and more specifically to the conduct of the State of Kansas. Derek Schmidt, the Attorney General of Kansas, now a current candidate for Governor of the State of Kansas, is a man without principles or scruples. He determined to treat Angelica and I the same way that Derek Chauvin treated George Floyd. Despite having in his possession direct evidence of ESU’s Title VII Retaliation since BEFORE we forced ESU to turn it over to us in discovery in 2017, Schmidt continued to keep the legal apparatus of Kansas pressed down on our necks until the Tenth Circuit of Appeals removed it this week on February 8, 2022. This direct evidence was presented in both of our motions for summary judgment in 2018, and as a result, ESU lost at summary judgment! In both of our cases! That is normally when cases like ours are settled. Both cases went to trial. We are quite certain that if we were represented by counsel this would have never happened. We were self-represented, and going through this process alone.  A pro se is not compensated for doing the same work as an attorney, which obviously we did. But Attorney General Schmidt knew he wasn’t faced with any attorney fees, or people with power, so he pressed on, forcing us to live in squalor, with friends and in a car for two years, trying his level best to wear us down, and drown us, all in defense of an explicitly guilty client, ESU. ESU only won at the Melvin Hale vs. Emporia State University trial because of a biased racist jury that had ESU students and alumni on it. At the second trial, the federal judge in Angelica’s bench trial knew that the direct and circumstantial evidence was insurmountable, so he gave Angelica the win on merits, but denied her a full accounting of her damages. We will always suspect undue influence from powerful forces associated with ESU for his measly award of nine months. But it is better than the $1 award that ESU wanted the public to originally believe. Everyone knows that ESU owes both of us millions of dollars for the damage and suffering their violations of our civil rights caused. However, we will take the WIN that Angelica prevailed any day.

No one believed that two self-represented litigants could bring down a public university in federal court AND Appeals Court because it has NEVER been done before! We proved them wrong. Our victory will stand forever, and hopefully give hope to others who need to fight to clear their names. That is what this win in the Tenth Circuit Court of Appeals means to us. ESU will go down in history as the university that denies the existence of hate crimes and that makes people hesitate before reporting possible bias incidents at their institution. They did their level best to destroy the lives of two productive members of society solely for being Black and demanding equal treatment. The person who was implicated in the writing of the racial slur as stated earlier, Debra Rittgers, a former employee at SLIM library school, currently working at ESU in another department, was shielded from doing a handwriting exam. And subsequently Rittgers filed a defamation lawsuit against us which was ultimately dismissed by stipulation of the parties. We have been exonerated by the Federal Court of Appeals, something that ESU would not do for us; however they issued a public exoneration for Rittgers in 2015. It is time for ESU to publicly exonerate the Hales. They did nothing wrong.

As far as the monetary compensation is concerned, we are disappointed but not surprised. Racism permeates every decision made in this country, and whites will never want to give blacks the reparations they rightly deserve; not back then, and not right now. This includes the actions of judges. No one wanted to see what the headlines would look like if we were accorded a full measure of our losses. So ESU can boast about low-balling us, and reducing us to poverty, but they couldn’t stop our truth. What they did was wrong then, and violated our constitutional rights, and is still wrong today. ESU and those who support their racist actions have to accept an un-erased loss that is historic. We took control of the story, which is hard to do when you're being lynched, but which is vitally important when fighting against racists like ESU General Counsel Kevin Johnson, Interim President Jackie Vietti, former Provost David Cordle, Dean of the School of Library and Information Management Gwen Alexander, Interim SLIM Dean and current professor Mirah Dow, Human Resources Director Ray Lauber, ESU Administrator Shelly Gehrke, former Interim SLIM Dean and current Interim Provost Gary Wyatt, and former ESU President Allison Garrett (who left quickly before the 10th Circuit of Appeals verdict was announced. We’re saying their names. Their actions violated our civil rights, and they don't give a damn, while all working as public employees in an entity receiving federal subsidies.

What's the matter with Kansas? Racism is what's the matter with Kansas. If Kansas culture were not racist, their Attorney General would have, at the very least, acknowledged his client was in the wrong, and settled the matter appropriately. Instead, he did a Derek Chauvin on our legal necks. Something needs to be done to correct this type of illegal and immoral conduct on the part of officials in predominantly conservative states. That is what is the matter with this country which is now tearing itself apart. It can aspire to no further greatness until it addresses its moral failings, starting by admitting them. There is nothing theoretical about any of this.

It was convicted and is unrepentant

Unacceptable conduct for a public university.